'30,236 of 30,577 people found the following review helpful
5.0 out of 5 stars DO NOT PUT ON KNOB AND BOLLOCKS
24 Jan 2012
By Andrew
Being a loose cannon who does not play by the rules the first thing I did was ignore the warning and smear this all over my knob and bollocks. The bollocks I knew and loved are gone now. In their place is a maroon coloured bag of agony which sends stabs of pain up my body every time it grazes against my thigh or an article of clothing. I am suffering so that you don't have to. Heed my lesson. DO NOT PUT ON KNOB AND BOLLOCKS.

(I am giving this product a 5 because despite the fact that I think my bollocks might fall off, they are now completely hairless.)
1,358 Comments |
Was this review helpful to you?
Yes /No

7,845 of 8,100 people found the following review helpful
5.0 out of 5 stars Oh the shame....
3 July 2012
By A. Chappell
After having been told my danglies looked like an elderly rastafarian I decided to take the plunge and buy some of this as previous shaving attempts had only been mildly succesful and I nearly put my back out trying to reach the more difficult bits. Being a bit of a romantic I thought I would do the deed on the missus's birthday as a bit of a treat.
I ordered it well in advance and working in the North sea I considered myself a bit above some of the characters writing the previous reviews and wrote them off as soft office types...oh my fellow sufferers how wrong I was. I waited until the other half was tucked up in bed and after giving some vague hints about a special surprise I went down to the bathroom. Initially all went well and I applied the gel and stood waiting for something to happen. I didn't have long to wait.
At first there was a gentle warmth which in a matter of seconds was replaced by an intense burning and a feeling I can only describe as like being given a barbed wire wedgie by two people intent on hitting the ceiling with my head. Religion hadn't featured much in my life until that night but I suddenly became willing to convert to any religion to stop the violent burning around the turd tunnel and what seemed like the destruction of the meat and two veg. Struggling to not bite through my bottom lip I tried to wash the gel of in the sink and only succeeded in blocking the plughole with a mat of hair. Through the haze of tears I struggled out of the bathroom across the hall into the kitchen by this time walking was not really possible and I crawled the final yard to the fridge in the hope of some form of cold relief. I yanked the freezer drawer out and found a tub of ice cream, tore the lid of and positioned it under me. The relief was fantastic but only temporary as it melted fairly quickly and the fiery stabbing soon returned .
Due to the shape of the ice cream tub I hadn't managed to give the starfish any treatment and I groped around in the drawer for something else as I was sure my vision was going to fail fairly soon.I grabbed a bag of what I later found out was frozen sprouts and tore it open trying to be quiet as I did so.I took a handful of them and tried in vain to clench some between the cheeks of my arse. This was not doing the trick as some of the gel had found it's way up the chutney channel and it felt like the space shuttle was running it's engines behind me.
This was probably and hopefully the only time in my life I was going to wish there was a gay snowman in the kitchen which should give you some idea of the depths I was willing to sink to in order to ease the pain. The only solution my pain crazed mind could come up with was to gently ease one of the sprouts where no veg had gone before.
Unfortunately, alerted by the strange grunts coming from the kitchen the other half chose that moment to come and investigate and was greeted by the sight of me, arse in the air, strawberry ice cream dripping from my bell end pushing a sprout up my arse while muttering..." Ooooh that feels good ". Understandably this was a shock to her and she let out a scream and as I hadn't heard her come in it caused an involutary spasm of shock in myself which resulted in the sprout being ejected at quite some speed in her direction. I can understand that having a sprout farted against your leg at 11 at night in the kitchen probably wasn't the special surprise she was expecting and having to explain to the kids the next day what the strange hollow in the ice cream was didn't improve my status...So to sum it up Veet removes hair, dignity and self respect...

You beat me to it; I was just about to post this.

My favourite review so far is:

Excellent product. Most prisoners confessed within five minutes of the first application. Can recommend.

Yours,
Ali Muhabarakah,
Secret Police, Damascus
Be careful what you wish for
Top 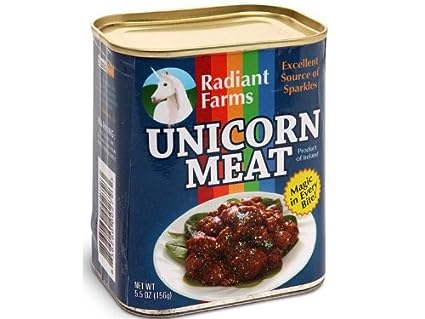 4,966 of 5,065 people found the following review helpful
2.0 out of 5 stars Tastes Like Spam, July 9, 2013
By George Takei
= Durability:3.0 out of 5 stars = Fun:2.0 out of 5 stars = Educational:2.0 out of 5 stars
This review is from: Canned Unicorn Meat (Toy)
When my shipment of unicorn meat from RADIANT FARMS finally arrived, I prepared the fragrant pate as a maki roll, wrapped in seaweed and spread over some sushi rice, with a little unagi sauce on top. This had been a staple during WWII when spam was standard issue in Hawaii, and it was how my cousins used to prepare it. Ah, the memories. I even had a half carafe of cold, unfiltered sake to pair with it.

Unfortunately, I found this unicorn meat brand to be quite similar to spam, both in texture and blandness. I'd been hoping for that zestier kick that comes from the rump cuts of other mythical and fantastical creatures, such as griffins or centaurs (for the latter, serve only the back half of the creature with guests, or it gets awkward).

Apparently, as Dateline recently reported, "farmed" unicorns are force-fed mostly genetically modified grains, rather than their natural diet of skittles and ecstasy pills. California in fact is ready to ban the practice and sale of such meat by referendum. Moreover, certain European countries were caught mixing in regular horse meat (yes, disgusting) so you never really know how pure the unicorn is.

Amazon recognizes them and embraced them as an art form.

Click here.
"A quokka is what would happen if there was an anime about kangaroos."
Top
Post Reply
5 posts • Page 1 of 1