How does one reconcile this?

The pinnacle (some say) of the Free World, bugging the former spokeswoman of a communist dictatorship (/irony), now leader of the biggest economy in Europe.

Seems like a bit of role-reversal. I wonder if Germany bugs American Presidents?
Top

Re: Defining freedom vs oppression.

JR8 wrote:Seems like a bit of role-reversal. I wonder if Germany bugs American Presidents?

My point of view is .. the NSA folks got caught .. the rest havent

btw, a snippet: the Indian Presidential / Prime minsiter's security have claimed the Indian PM/President are un-hackable ..

and a little wise-ass commented that's because they don't use mobile phones, no email, no internet .. 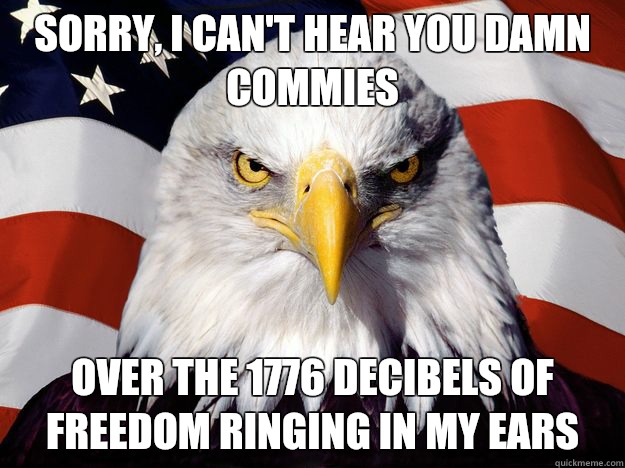 Haha... ironic, considering the US voted in a commie-lite president.

I have a feeling that America, if it so desires, can define itself versus the likes of wacko states (yes 'states') like socialist France, and it's rather more centre-field workhorse-donkey Germany. But, versus the rest? I don't know, I think there are states in Europe more free than the US is. I mean ... to American readers out there... do you, actually feel that you are more liberated than most other people (honest question). What do you have that others don't?

p.s. Take as an example the 'Right to remain anonymous'. I wonder how SG, UK, US, FR, GE, CH and so on would weigh up on that scale...
Top

but how do any of these other countries
Protect YOUR FREEDOM?

eastcoastsg wrote: It's a game of tag and this time, the US is 'it'

Exactly. It's stupid to think that every other country in the world isn't doing this if it is within their technical capabilities. The US is just the biggest and most obnoxious about it, so they get targeted and the press likes to talk about them doing it. I'm sure if Germany caught France (or vice versa, or insert random western european countries instead), there would be some gentlemen's agreement for both sides to STFU.

Here's a great analogy: Apple and Chinese (or Asian) labor. Every major electronics company in the world 'exploits' cheap labor in Asia. But how many of those companies had multiple series of articles in the NY Times and such about their labor practices? Just Apple (the US), with a small side of Samsung (say, the UK). What about the other dozens of monstrous electronics companies? Microsoft with Xbox (They can be France), Sony (German), etc? No one really gives a shit, so you didn't hear much about it.

Plus, I'll admit we the US would have the small amount of retards calling to bomb France or Germany if we caught them spying on us, so the press is probably exercising discretion

Not that those western European countries likely don't have the same thing going on, but we don't hear about it. Why? No one cares.
Top

I wonder if individual US states spy on each other, you know like Hawaii wire-taps Alaska

Surely, there would be some state-level self-interest in such an operation?

Yes I agree America is too often the convenient punchbag. For me, it's really tiresome, as 'The devil they love to hate'. I've lived in suburban USA, with the cliched gun-nut opposite, the Costa Rican lawn-dog up the street, the Afr-Am adulterer next door but one, and the VNVet with their 10 year old daughter, 'Crystal', going to spelling bees and ice-skating comps 3* a week. They were our immediate neighbours. Oh, and the coke-head banker upstairs. I've seen many facets of 'the dream' first hand, and in general I think it a thing of beauty.

The media (at least in Europe), in aggregate, is left-wing. You thought Wall Street was PC these days? Try speaking to an employee of the BBC! I'm am being serious and honest in saying that from those I've known who have worked there, you cannot work there, and be known as a Tory party supporter (i.e. to the right of centre). If there is a political equivalent of 'institutional racism' the BBC is it's very pinnacle and so defines it (ironic given their founding charter requires complete beyond-question impartiality). In the UK I don't watch the BBC news* (lol, in the same way that when in NYC I don't read the NY Times, or watch CNN, for world news), I watch ITV, it's far less biased. Sky is arguably to the 'right', I don't know, so ITV is the middle ground, and let's me make up my own mind on events.

Let's face it, the French still have a big fat bug up their ar$e about being liberated by the US in WW2. Since Marie-Antoinette, Versailles and 'let them eat cake' France has been socialist. The national motto Liberté, égalité, fraternité = Liberty, equality, fraternity. That's how deep it now is in their genes. They are never, ever, going to at a national level get over 'that WW2 thing'.

I like your 'only Apple/China' analogy, I get your point, and think it a good and useful observation.

'Not that those western European countries likely don't have the same thing going on, but we don't hear about it. Why? No one cares.'

LOL ... don't you mean 90% of the US population don't know where/what Europe is?

p.s. Is there some vast gulf between the average citizen and the state? '''95% of the country''' have not heard of FraKorVieKuwIraqistan, and yet at a state level direct physical intervention is mandated... and it's not even like they're colonies.

[random thoughts, just musing aloud, no offence intended to anyone, and I'd be very happy to ... 'learn and grow' from alternative opinions... bald jingoism and JPEGS of eagles excluded hehe].

* people should note that the domestic BBC output, it completely different from that available from outside the UK, i.e. the BBC World Service, BBC World etc.