Anyone have any idea about this stamp?

Anyone have any idea about this stamp?

Up until Jan 2019, I was on student's pass, studying for ACCA. The pass couldn't be renewed, thus I went back home.

Because I registered my ACCA membership in Singapore, the school was also enrolled me in the ACCA-ISCA pathway programme. Therefore there are few exams that only can be taken here as it's using Singapore standard.

Long story short, I went back at 4 March for my exams. No issue at the entry. Was given normal 30 days pass. I initially wanted to stayed for 2.5 weeks. The exam was one week, I spent another 1.5 for catching up with my cats, partner and attend a birthday party of my friend.

But then my partner had to go to US for business trip and it was set at the last week of my visit pass. That month I had to bring the cats for their annual dental and check up. The bill was already quite high. Our usual cat sitter wasn't available and Nekoya was quite expensive. We decided it'd be cheaper if I stay here. I tried with online extension and it was rejected. Nevermind. I stayed until 4th April. I exited the country with no issue.

So I planned the next trip on 2nd June for my June exam intake. The exam would be from 3rd to 8th June. I planned only to stay for 10 days.

The IO looked at my passport and asked for my Indonesian IC. I gave it to him. He then asked me to go to the office. After waiting for a while, my name was called and I was being asked what is my purpose of coming to Singapore. I explained it to them. I showed them the exam docket. She took my passport and talked to another IO. After a while he came and said I can enter the country but only can enter 10 days. I said that's fine I just want to take my exams. He said ok and asked me if I would leave after 10 days. I said of course I will. He also said I actually overstayed for a day. Stupid me, I completely forgot that March has 31 days. I apologised and he said it's okay and he just wanted to remind me that.

He then stamped this on my passport. When I asked if I could enter on September later for my exams, he said I should be able to, but I need to show the IO all the relevant information.

The stamp said I can remain until 12th but I don't want to take any risk and will leave tomorrow on 11st.

The thing is, I have a Japan trip (10 days) coming up on 5th August. I planned this a long time ago. The flight would be from Singapore. I was thinking to come on 3rd August and show the IO my return ticket, including the ones from Singapore back to Indonesia. Will I have trouble later coming in to Singapore?

Also, does anyone have any idea about this stamp? This is my first time getting it. 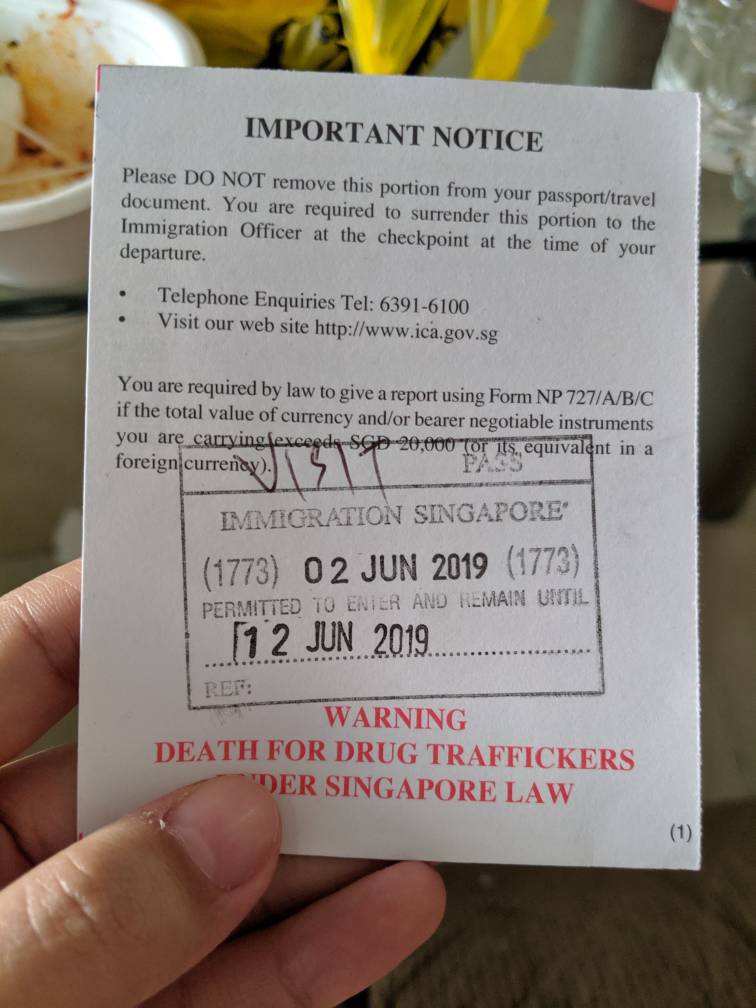 Return to “Relocating, Moving to Singapore”