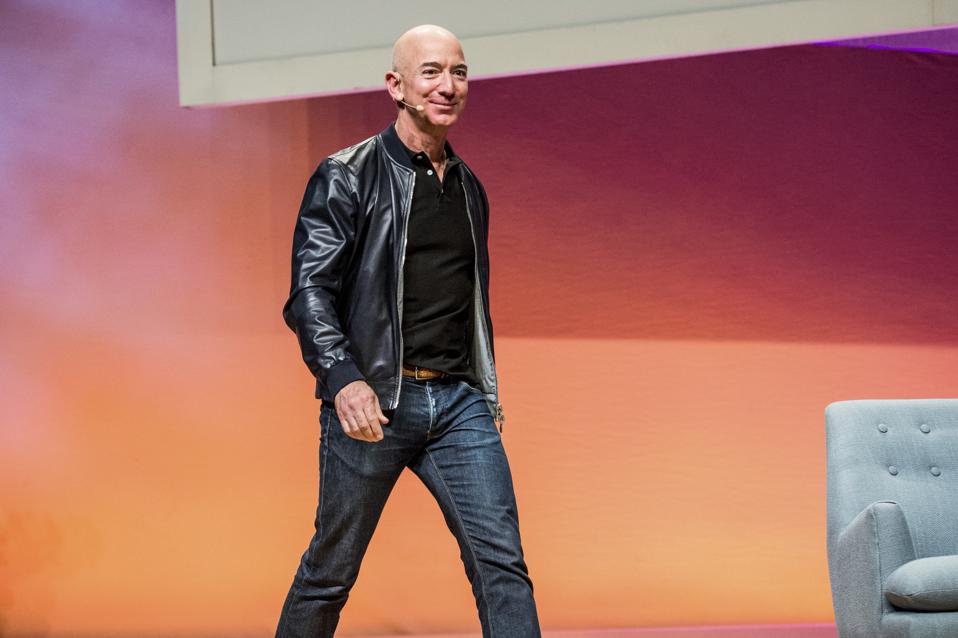 Amazon CEO Jeff Bezos is the world's richest person. (Photo by Amy Harris/Invision/AP)
Amazon CEO Jeff Bezos' two day streak as the world's only centi-billionaire is over -- for now.
Bezos' net worth topped $100 billion for the first time on Cyber Monday as Amazon shares soared. On Wednesday, his net worth fell $2.2 billion to $98 billion, as Amazon stock dropped more than 2% from Tuesday's close as of 1:45 p.m. Eastern Time. Because Bezos owns more than 16% of Amazon, small fluctuations in Amazon's stock have billion-dollar consequences for his net worth.
While he no longer has a twelve-digit fortune, Bezos is still the richest person in the world by an $8.6 billion margin. The second richest person is Microsoft cofounder Bill Gates, who has an $89.4 billion fortune and has been at the top of the Forbes' annual Billionaires List for 18 of the last 23 years. On October 27, Bezos surpassed Gates on Forbes' Real-Time Rankings and has held onto the top spot ever since. Three months earlier, Bezos briefly passed up Gates, but dropped into second place after only four hours.
The nearly 60% rise in Amazon stock this year to date has added $33.1 billion to Bezos’ fortune. His net worth has more than doubled since Forbes published the 2016 Billionaires List in March 2016. At that time, he had a net worth of $45.2 billion and had just joined the ranks of the 10 richest people in the world for the first time.
After graduating from Princeton, Bezos worked at hedge fund D.E. Shaw before leaving to start an online bookstore from a garage in Seattle in 1994. He took Amazon public in 1997 and one year later joined Forbes' ranking of the 400 richest Americans with a $1.6 billion fortune. In the two decades since, Amazon has grown into an e-commerce giant and one of the most valuable companies in the world, propelling Bezos to the top of Forbes' Real-Time Billionaires List.
Link: https://www.forbes.com/sites/katevinton ... c454db2279
Top

FTR, to date, philanthropist Bill Gates has given over 50 Billion of his net worth to charity.
Amazing Anambas
Top