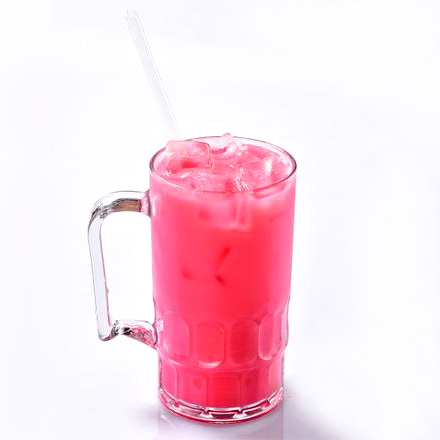 When you’re slurping down a steaming bowl of your favourite laksa, with beads of sweat rolling down the sides of your face and your shirt sticking to your side, there’s nothing quite a long, refreshing gulp of a cool drink to complete your sense of happiness. In Singapore, you’d be spoilt for choice as there are many different locally-inspired drinks to suit every taste.

In spite of its name, this drink is not found in Bandung, Indonesia, but in its neighbours, Malaysia and Singapore, instead. In Singapore, bandung enjoys great popularity, especially in the Malay community. The drink is made from rose cordial, water and milk.

Typically sold only in the larger food centres, sugar cane juice is a delightfully refreshing drink that is made fresh on the spot with each order. The canes are fed into a press which extracts the sweet, green juice smoothly and easily. A slice of lemon can be added to give a refreshing tartness to your drink. The sweet drink is safe for diabetics as well, as it has a low glycemic index and has a smaller impact on blood glucose levels, compared to other sugary foods and drinks. Sugar cane is also a rich source of iron, magnesium and antioxidants, and has purported benefits for those suffering from constipation or diarrhoea.

Just as its name suggests, grass jelly is made from the leaves and stalks of a plant. The plants are boiled down into a smooth gelatinous substance that is dark brown or almost black in colour. Known for containing zero nutrients and zero fats, this is one dessert which you can eat without feeling too guilty. Grass jelly is often used as a topping for desserts, but is also drank as part of a sweet drink.

A drink that is especially popular in Singapore and Malaysia, Milo is a drink that both the young and old know well. In the past, school-going children drank this chocolate malt drink at sports events, and the seeming correlation between this drink and athletic prowess was a lesson that many a student had observed and taken to heart. These days, Milo is still enjoyed but not so much as a nutritional drink, but as more of a sort of decadent dessert. Plain Milo is still delicious sweet and chocolatey, but the Milo Dinosaur takes things one step further by topping the drink with numerous spoons of Milo power scattered across. The Milo Godzilla includes even more calories than the other two above, and is basically an upgraded Milo Dinosaur with even more powder on top, as well as a scoop of ice cream and even whipped cream sometimes.

This iconic drink is perhaps the best known of all local drinks amongst foreign tourists. The cocktail is mixed, created straight up and without adding any ice. The Hainanese bartender at Raffles Hotel’s Long Bar, Ngiam Tong Boon, had created this drink sometime before 1915 with gin, cherry liqueur and pineapple juice.

Served cold or hot, soy milk, or soybean milk, is a very popular drink in Asia due to its delicious taste and nutritional benefits. It also doubles up as an excellent substitute for milk, and that’s great for Asians, because lactose intolerance in adulthood is most prevalent in the East Asian population, according to the U.S. Library of Medicine. However, what’s really amazing about this sweet and milky drink is its ability to lower the amount of bad cholesterol found in the body, i.e. Low Density Lipoproteins (LDL), while increasing levels of High Density Lipoproteins (HDL). HDL cholesterol is considered good cholesterol as it removes LDL cholesterol that clogs up arteries, and transports it back to the liver to be broken up and expelled from the body. Soymilk is also helpful in preventing osteoporosis as the drink helps your body to better absorb calcium.