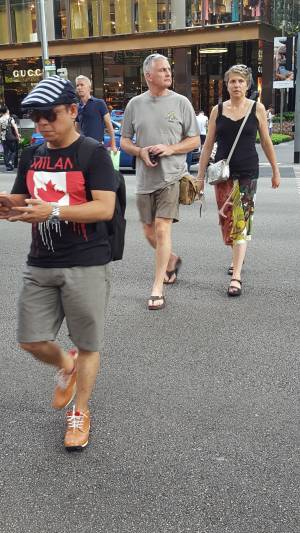 Dubbed as ‘Asia Lite’ by some, modern Singapore makes an attractive tourist destination with its predominantly English-speaking populace providing a much gentler introduction to life in Asia than most of its regional counterparts. In particular, it holds great appeal for tourists travelling with their families and as well as for foreign professionals looking to emigrate. Nevertheless, to any traveller coming from outside of Asia, while local attractions may provide a feast for the eyes, it is the cultural norms in Singapore may provide some of their fondest, if not most startling, memories of their time in Singapore.

In this article, we’d introduce various aspects of local living that may seem quaint, draconian or quite simply baffling to the foreign visitor. We hope that this information would help to ease any sense of disorientation that one may experience when visiting Singapore for the first time, and that it’d help you to truly enjoy your time here.

All joking aside, it generally shines more than it rains throughout the year, so you don’t have to worry that much about being caught in wet weather. As a bonus to being situated right above the equator, Singapore’s tropical climate is pretty hot and humid all the year round. It’s not uncommon to find people bearing their umbrellas aloft in the streets every day—they’re using them mainly to hide from the freakishly strong sunlight. Women are particularly conscientious about doing so in order to preserve their pale porcelain complexions. Umbrellas may also come in handy when you’re looking to snag a table at lunchtime and haven’t a spare pack of tissue paper tucked in your bag—we’d explain in the next point.

2. Use a pack of tissues at lunch hour

What do you do when lunch is only an hour long and the queues at your favourite hawker stall are already starting to snake into the adjacent stall’s territory? You’d like to order your food pronto but if you leave the table, that couple lurking over there is definitely going to grab it. What now?

This headache may occur only in Singapore, Malaysia or Hong Kong where hawker centres and food courts are prevalent. A hawker centre is essentially a covered space shared by hawkers who each lease their own stall, with a free-for-all area for diners who may choose to purchase their meal from any of the stalls. A food court works on the same principle, but with the addition of air-conditioning to the space.

When it gets crowded at lunch hour, it can be pretty tricky to snag a table for your friends and yourself while ensuring that your food somehow arrives simultaneously for everyone to eat together. In order to avoid the sad inevitability of making mournful eyes at your steaming curry rice while your friend is still queueing for his meal, take advantage of the Tissue Paper Law to ensure that everyone purchases their meals at the same time. In Singapore, it is an unofficial rule that any table with a packet of tissue placed on it is claimed territory. However, should the place be really packed, some may use tissue paper packs to chope (a Singlish term meaning ‘reserve’) just a single seat at a table—which could lead to some pretty bizarre sights such as four to five packets of tissue circling an empty table top.

3. Save the small talk for your colleagues

Some of the friendlier visitors who attempt to ensnare an unwary Singaporean with small talk, may find themselves disappointed as their quarry gives them the side eye before fleeing. However, don’t take it personally. Many Singaporeans are polite and would do their best to assist you if you’re lost or need any help when navigating the day-to-day life. However, the concept of making small talk for no perceivable reason is one that makes them nervous and somewhat suspicious. A smile from a stranger would also cause them to be somewhat taken aback.

Though it takes a little more time for Singaporeans to warm up to strangers, it’s worth the wait if you’re staying in Singapore for a while. In fact, those who have moved to Singapore may face the opposite problem—once the locals have got used to seeing them around, they’d start making small talk with them all the time. In such situations, get used to having them remark on everything from your new haircut, to your clothes, to your nationality and job.


In following section below, we hope to bring to you more curious gems of Singaporean phenomena, beliefs and habits that could go a long way in making your trip or stay in Singapore a little less disorienting and a great deal more fun.

1. We have discovered the meaning of life and it is food

If there’s ever a right answer to the question, ‘Eat to live, or live to eat?’ you should probably know that the latter is always correct anytime and anywhere in Singapore. Aside from shopping, dining is probably the one activity that Singaporeans love best and they will not hesitate to travel immense distances for a favourite dish—or at least, as far as they can go, on an island that spans 50km across.

In fact, as a mark of how much we love our food, we don’t ask others how they’re doing when we make small talk—we ask if they have eaten. This may bewilder foreigners when the expected invitation does not arrive, so do remember to treat this question as a social nicety that does not necessarily extend to a lunch date. In general, we think that well-being is directly proportionate to the presence of food in our stomachs. If you’re dining with a Chinese friend or relative, it may be insulting to your host if you’re not eating enough. In short, you’re not leaving the table until you’re waddling or rolling your way out of the door.

2. There’s a pot of gold at the end of every queue

Perhaps one of the most common impressions of Singaporeans is the country’s general orderliness. Whether you’re ordering food or trying to board the train, it’s almost guaranteed that there will be a queue and that people will be following it religiously. You could try to cut the queue, but it’s highly likely that you’d wind up being shamed by the person behind the counter and glared at by everyone else who’s standing in line.

If you need to impress a Singaporean relative, friend or colleague, nothing conveys your sincerity more clearly that food that you had to spend time queuing up for. If you’re in Singapore during Chinese New Year, you’d get bonus points for queuing up to purchase Bak Kwa, a sweet and savoury barbequed meat that jumps in price and popularity during this period. Expect to wait over two hours in the queue at the most popular stores.

This propensity to queue is actually a pretty good indicator of the most popular food stalls or the best deals in the area. Never ones to pass up freebies, Singaporeans frequently line up to redeem free gifts that are distributed as part of companies’ marketing efforts. It’s not uncommon for people to join queues without knowing what they’re queuing for, secure in the knowledge that everyone else must be on to a good thing.

3. Taxis are an affordable mode of public transportation

Unlike the exorbitant fares charged by iconic London cabs and lavish Japanese cabs, Singapore cabs charge a very reasonable amount for the same distance travelled. For a normal cab ride, taxis charge an initial ‘flag down fee’ of S$3.20 to S$5.00 that’s inclusive of one kilometre’s worth of travel. Consequent travel rates range between 22 and 33 cents per 400 metres or part thereof travelled. Even if toll charges or midnight charges are levied, travelling from the eastern or western end of the island to the city centre is unlikely to cost more than S$30.

However, do note that depending on the car model, the flag down fee and travel rates differ—the larger and more luxurious the cab, the higher the cost. Nevertheless, taking the high cost of car ownership in Singapore into account, it could be more economical and convenient to travel regularly by cab. A potential downside to this would be the difficulty in finding a cab in rainy weather or shortly before midnight. Also, some taxi drivers rely on their passengers to guide them to their destination, especially if they don’t have access to GPS in their vehicle, so be prepared to hand out directions or to name the nearest landmark at least.

Travelling by cab is also a fantastic way to learn more about Singapore. In other countries, it may be common for people to chat with their regular hairstylist while sitting in relative silence in cabs, but this rule is inversed in Singapore where many hairstylists are taciturn while cab drivers are likely to quiz you about everything from your day’s plans, to your current occupation and nationality. They are generally well-informed about the best places to eat and the best places to go, and are hilariously opinionated about the local scene and a great fount of knowledge about all things Singaporean.

Issue with #3. If it an older auntie, they don't care who your are and they will ask you where you are from how many kids you got, where do you stay and how much you money you make (seriously and they expect an answer as well!)
Top
Post Reply
2 posts • Page 1 of 1