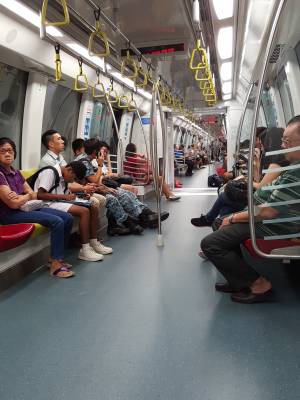 Adjusting to life in a new place can be a challenge, especially when there is a big gap between what you are used to and what you are experiencing. However, if you learn about the country's people and culture in advance, you may find cultural differences less shocking and more manageable.

If you don't already know, Singapore is home to three main ethnic groups (Chinese, Indian and Malay) and people from the four corners of the world. It is a melting pot of culture with a very unique set of social customs, languages and sensibilities. As with all countries, some cultural tendencies are good and some, bad. To help build your cultural awareness, we’ve round up some of the darker aspects of life in Singapore that may be relevant to you. Hopefully, this knowledge will turn any possible cultural shock into more of a cultural expectation.

The MRT is the primary mode of public transport for locals and foreigners, a high capacity system that millions depend on daily. It can get quite crazy as rushing commuters push and nudge their way into the carriage during peak hours (6.30–9.00am and 5.00–7.30pm). While the train situation in Singapore isn't as severe as that in Tokyo, you can expect to be pressed against someone else’s body and have people literally breathing down your neck on your daily commute to and from work.

Trains are generally less packed during off-peak hours but while you need not contend with huge crowds, you may experience or witness ungracious acts onboard. These acts generally take the form of people blocking train doors in attempt to be the first to enter or exit; people (haphazardly) running to secure a seat; people feigning sleep to avoid having give up their seat to someone in need; and people who hinder others from entering by refusing to move to the centre of the carriage.

If you experience any animosity in the aforementioned situations, just remember that It’s nothing personal. It’s just part and parcel of life in Singapore, like the hot weather.

Singaporeans are generally passive when it comes to public affairs – the silent majority, as they are called. Nevertheless, there are also a vocal few who take to the internet to air their judgements like laundry – most of which are skewed and dissenting. It is not uncommon to witness online users unleashing unsavoury comments about an issue without understanding the full picture; jumping to conclusions just from a clickbait headline.

As far as Singapore is concerned, media literacy is largely still a work in progress. If you ever get caught in a senseless online tussle with a keyboard warrior, the best thing to do is make peace or leave the conversation. As Mark Twain suggests, “choose your battles wisely”.

Singapore is currently the most expensive country to buy and own a car thanks to strict government regulations on private vehicle ownership. A Prius can set you back by a massive $154,000, while a typical $20,000 Honda in the US can cost you $100,000 in Singapore. This exorbitant pricing is all thanks to the cost of the Certificate of Entitlement (COE) – a compulsory vehicle licence. Make sure you’re mentally prepared before you set your heart on getting a car, lest you get the shock of your life.

Like cars, the price of booze is also rather steep due to high import taxes on alcohol – the supposed necessary evil for society’s good – and the usual consumer Goods and Services Tax (GST) to top it off. Regular booze at bars are upwards of $12 and anything less would be a steal. So, don’t cry foul when you receive the bill.

Singapore will not be where it is today without migrant workers’ contributions to our public infrastructure. While most Singaporeans acknowledge these workers’ efforts, a handful of small-minded people still harbour bigotry towards them. This may be a consequence of Singaporeans’ reverence for a ‘successful career’ and therefore, contempt for less desirable (hard labour) jobs and people in it. Whatever the reason, such stigma is often experienced by migrant workers. In response, many of them give up their seats to locals while commuting, or give them priority when accessing public facilities – neither of which they are obligated to give up.

Thankfully, there is growing awareness around this issue and more Singaporeans are stepping up to make society more inclusive for these workers. So, the next time you bump into a migrant worker, be nice.