Hi all, I just started cycling not too long ago and usually cycle at night. One day while driving at night (it was quite dark) I saw a cyclist in front of me and he suddenly changed lane to the left without signalling his intent. But as I got closer I saw that he actually did put his hands out to signal but it was just too dark to see.

This got me thinking that if I were the cyclist and had the driver decided to overtake me on the left quickly, I could have been hit! As a driver myself I think it's safer if cyclist also have some kind of signalling device like motorcycles.

I have been trying to find some kind of signal lights for bicycles but haven't been able to find any good ones. Only ones I've found are those that run by wire which I find troublesome. So just want to find out if anyone here has something to recommend?
Top

Have a look at kickstarter.com, there are quite a few bike light projects and some have signal capability. The successful projects normally provide contact websites for purchases.
Top

And less than SGD $11, delivered. You just took the wind out of his sails.

Just an example as an appetizer to search through Ebay. Personally I am hesitant to buy from any seller with the rating below 99.0% and less than a few hundreds transactions.

Here, from a much better one and even cheaper:
http://www.ebay.com.sg/itm/3-in-1-Cycli ... SwNgxWEPax

Whether the set is a crap or not is a different story. Unless you see lot's of negative/positive feedback for the specific item you are going to know only when you get it. I reckon, for a 10 bucks is worth the risk.
Top

They offer some interesting solutions like this one:
http://www.amazon.com/dp/B00YMECVPM/ref ... B00ZQ3SAHQ 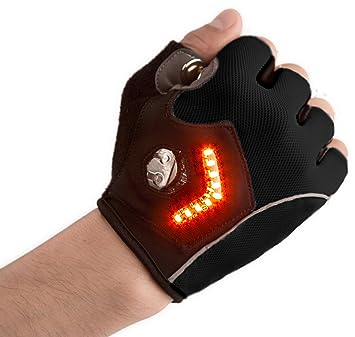 And after my response I went over to Kickstarter to have a look. So easy to waste an hour or two there.

I reckon the OP won't be back as I think he was going to try to sell us something and we beat him to the punch. I mean, how are was it to find this stuff on google/ebay/amazon, etc.
Top

That's the one I looked up before but I didn't like it because of the wires. Stumbled upon this:

Has anyone tried this? So far I've only found this to be the most functional and aesthetically pleasing.
Top

At 4.5x the cost, I should hope so. Fools & their money. You got wires/cables running front to back already, one more shouldn't make any difference.
Top

Aslante wrote:That's the one I looked up before but I didn't like it because of the wires. Stumbled upon this:

Has anyone tried this? So far I've only found this to be the most functional and aesthetically pleasing.

I am pretty sure many drivers will not recognise it as a turn signal even from a relatively close distance. Somebody who designed it seems to have no idea how such lights are perceived on the road. Have you ever realised how critical for any narrow vehicle like a motorbike or bicycle is to have a reference point (i.e. red light) in between the turn signals especially for something that small as the device you say you "like"?
It is even more critical for a slow moving bicycle. From the distance of 100m, at night, many drivers may already see it as a single blinking point, this distance translates to a few second at best where you may start to turn and the driver has to react.

Besides, there is possibly one more flow with such concept. I am talking about the situation where the signal is not a single point but rather like in this case it shows a specific direction. Such signals, most often light arrows, are used in slow moving road utility vehicles or lane closures to indicate the side the blocked area/object should be passed.
I think you should have enough imagination to realise what this actually mean.

BTW, judging from your responses so far I agree with SMS - It looks pretty much to me you've been trying to sell this gadget. I will only leave the link you posted so people googling for this sort of device may find it and make informed decision based on this discussion.