Discuss about any latest news or current affairs in Singapore or globally. Please DO NOT copy and paste news articles from other sources without written permission.
Post Reply
154 posts

ok lah! I don't wanna be as supportive of him anymore. He is causing too much damage. Loose cannon!
Top

A few excerpts:
https://mishtalk.com/2016/07/28/puppet- ... ns-puppet/
'Puppet Theory: Is Trump Putin’s Puppet?
...No one is pulling Trump’s string. Indeed, the Democrat and Republican leadership hate Trump precisely because he is no one’s puppet.
...The irony of the Slate article is Hillary Clinton is the real puppet! For starters, Hillary is a puppet of the progressives, the SEIU and public unions in general, and the warmongers.
The neocons so desperately want a war-puppet they can control, they are willing to overlook the fact that Clinton is a puppet of other groups the warmongers do not support. ...'
'Do it or do not do it: You will regret both' - Kierkegaard
Top

must be his die-hard fan

Proof that any idiot can write any sort of tripe and post it on the internet, and _someone_ will take it as truth carved in tablets from on high.
.

Trump's comment about Obama's connection to Isis. The guy is too nutty for me, now.
Top

Re: RE: Re: Donald Trump

earthfriendly wrote:Trump's comment about Obama's connection to Isis. The guy is too nutty for me, now. 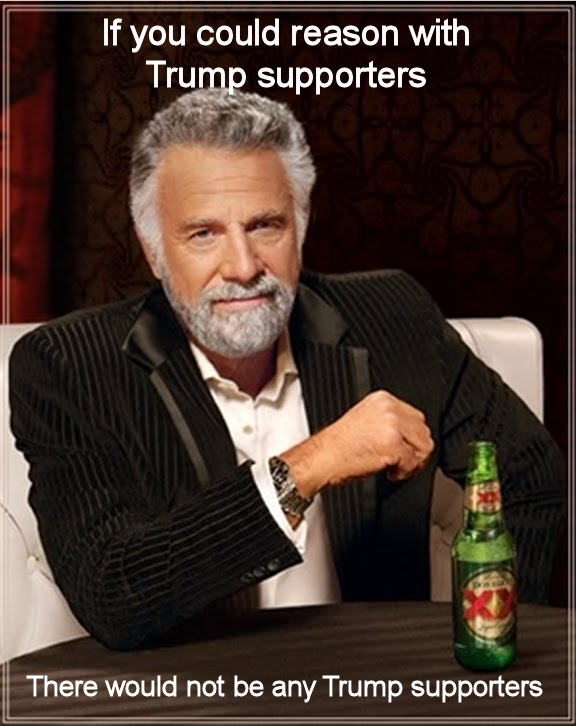 Re: RE: Re: Donald Trump

earthfriendly wrote:Trump's comment about Obama's connection to Isis. The guy is too nutty for me, now.

Where did he do this? If you are talking about his comments in S.Carolina, I suggest you actually listen to what he said and not what the DumboPress claims. Obama called on ACORN to rally the black demographics to get elected the first time. (which is racist as hell) but Trump called on another demographic that cuts across all racial lines but called on the supporters of the 2nd Amendment to not vote for her. I never heard him mentioning killing anybody. (That's only in the minds of the Wacko Demos and Asians here in Asia). But then again, what do you expect when they more or less control the media.

But yeah, I tend to agree that Trump has gone off the deep end. I wish The Johnson-Weld Libertarian Party would get enough states to be included in the debates. I'm leaning that way, but the only problem with it is I hate Hillarity and any vote for a 3rd party ticket means a vote for Hilarity as it will take it away from the Trump.
Top

Yes, that remark was way over the line. No sane leader who believes in democracy even wants to come rhetorically close to calling for the assassination of his political opponent, her appointees, or both. You just don't go anywhere near there. But Trump went there.

SMS, it is the responsibility of people in power to at least attempt to be unambiguous in their words. One must be aware of not only what one says but how it is heard and perceived. Great speakers work diligently to ensure that their choice of words creates a clear meaning in a clear context. Trump has done exactly the opposite in multiple situations.

Now maybe it's a genetic quirk that causes him to mash the language, or perhaps it's a Freudian slip, symptomatic of a darker shadow within, or perhaps he is actually suggesting that dark actions be taken, or perhaps it's just because he's a terminal dumbass, but in any case, it's one more telling point of how unqualified this man is to be President.
.

I'm not arguing that point (the dumbass one). But it would take a whole lot of stupid in anybody it they thought it was what wasn't said but everybody who doesn't like him thinks it was. Sorry, but it sounds like your side has lost their common sense and thinks the rest of the country has lost their's as well. They are hearing what they WANT to hear. I didn't hear any such thing. What he said makes sense, that whole demographic, if they were to vote against her, then there would be no Democratic choosing of the next SCOTUS seat warmers for the next 30 years. That would nix her plans proper. No need to even go where you are wishing what he would have said but didn't.
Top

sundaymorningstaple wrote:But it would take a whole lot of stupid in anybody it they thought it was what wasn't said but everybody who doesn't like him thinks it was.

Then many, many members of his own party are also "stupid."


What he said makes sense, that whole demographic, if they were to vote against her, then there would be no Democratic choosing of the next SCOTUS seat warmers for the next 30 years.

Except he didn't say that. If he had said that -- used the word "vote" -- there'd be no controversy. No, he literally, precisely said "if she gets to pick" (meaning, she won the election, after the vote), there's "nothing you can do" except....

People are in an uproar because they should be. Democrats, Republicans, independents, everybody. You just don't even come anywhere near calling for the assassination of your political opponent or of federal judges. Not cool, not at all.

I'm long past tired trying to figure out why he says so many things reasonable people can interpret as absolutely batshit crazy or worse. Who cares. The man cannot speak without pissing off huge segments of the American population never mind anybody else in the world, such as other world leaders. One of the basic prerequisites of the presidency ought to be an ability to communicate clearly and effectively. He cannot. That defect may work on reality television. He's welcome to that, again.
Top

No, he literally, precisely said "if she gets to pick" (meaning, she won the election, after the vote), there's "nothing you can do" except....

Again, you are hearing only what YOU want to hear. your own quote indicates that the telling them now to head off before it happens (If she gets to pick (meaning voting against her so she doesn't win the election and doesn't get to pick.) You are just looking for a way and for once you are failing miserably. Only Anti-Trump Republicans (who didn't turn against him today but some time back) and Dumbocrats are trying to read it arse to front. All he's doing is saying if you want to keep your 2nd Amendment rights you need to vote for trump and thereby prevent her from having the ability to pick the new SCotus judges. You all must have taken thick pills the last month or so.
Top

No, there are more Republicans who he managed to piss off with this careless, sloppy (at best) remark. He has crossed many lines, and this one was another.
Top

I am not an American but Trump's remark was also understood by me as an indirect reference to assassination. It could mean something else but he should directly say what that something else is.
Top
Post Reply
154 posts